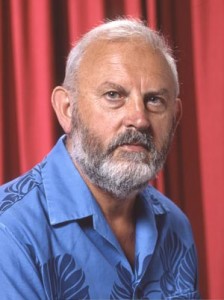 Few people have used the idea of videotape better that Professor Bob (Robert) Spence. Bob joined the staff of Imperial in the 1960’s and is now Professor Emeritus in EEED. His field of work has ranged from engineering design to human-computer interaction and along the way is credited with the invention of the first ‘focus+context’ technique, the Bifocal Display (aka Fisheye lens). You’ll be seeing the Bifocal Display idea in a while.

My first encounter with Bob was way back in 1975 when we recorded a live demonstration of the computer language APL (A Programming Language (link above). This is the oldest surviving teaching videotape we have and was made without the ability to edit and in glorious black and white. However, it does feature a novelty at the time of the recording, that of split screen. This was shot in our TV studio ‘number one’ located then in the Electrical Engineering building.

In June 1979 Bob’s interests were in the area of electronic circuit design. With colleagues, he had devised MINNIE allowing a circuit designer to describe a circuit by drawing it on a screen. Using a ‘light pen’ to interact with the screen, circuits could be created and modified.

The most interesting artifacts (as Bob calls them) were the “on screen pocket calculator” (1973) and the “count-down clock” indicating the process time.  The on-screen calculator is thought to be the first in the World and both these functions are now common place. Bob frequently reminds me of the fact that we were about to move into colour TV (1979) and how he halted the removal and replacement of the computer running MIINIE so we could shoot the video in colour. Here’s the end result from June 1979 (link above) and you can see the calculator at 5min 30secs into the video.

By 1980 the idea of ‘focus+content’ had been identified and a solution called the Bifocal Display created, well in mock-up form anyway. Bob wanted to create a video to show this and other concepts to a wider audience. Again, videotape was a solution to this. So, in the week we all finished for Christmas in 1980 we shot a video which is now credited as being the first ever ‘envisionment video’, “Office of the Professional”. For the time, this was a most complicated video to make. Although with converting  into colour we had gained the ability to edit, this was like no other video we had made before. Scenarios in an office, external elements and multiple video screens -all showing content- only added to the overall complication.

The office desk was made mostly of cardboard and felt. The buttons seen being pressed were not bright enough to be seen by our early colour camera, so higher wattage bulbs were inserted. This made the buttons so hot you could hardly touch them, let alone press them! The variable ‘zoom’ control on the monitor did nothing and was made of cardboard.  The display on the screen was actually running from a videorecorder  and Bob had to synchronise his hand movements to the pre-recorded tape. In one scene we needed two screens showing information and therefore need two playback machines, plus the machine recording the output from the camera, so three video recorders were all running at the same time. In one sequence you’ll see ‘pointing’ at the wall and the phrase ‘here’ being used. Bob tells me that this concept is not too far away. Bill Buxton in his 2007 book ‘Sketching user experiences’ is quoted as saying, in reference to the video, “….is the first example of envisionment videos that I am aware of….” and “….remarkable for its insights…and two years before the launch of the Apple Macintosh.” And finally he says of the video “…I have a lot of respect for those who made it.” Bill Buxton’s book is prefaced by Bill Gates. Once again, a small piece of history is recorded in our archive. Oh and the standing joke between Bob and myself is that one or the other of use will have to say the magic word “here” during a conversation. Most of this is very obvious in the 1980 “Office of the Professional” (link above).

Not wanting to make a video any less complicated or involved than previous ones, Bob came up with a gem of an idea in 1994. “Translations” was once again an envisionment video (link above). It shows a dinner party taking place in the year 2020AD and hosted by an eminent engineer, for other engineers who describe, for the benefit of a journalist, how they practice design. The message was concerned with human-to-human communication facilitated by computer. The video took many weeks to shoot as there were several locations used: Silwood Park where the main dinner party took place; 170 Queens Gate in the Rectors flat and the TV Studio. One fascinating thing to look out for are the use of PIG’s, Personal Information Gatherers. See if the concept reminds you of Bluetooth devices, common place today. Also, during the dinner party the idea of a worktable, able to sense what you were doing was suggested. Microsoft has just demonstrated one! One final thing before you watch the video. For those who know me, try and spot where I re-voiced the sound for one of the people in the video, oh and I’m not saying ‘here’ either. Bob Spence plays the butler in the video “Translations: Engineering Design 2020AD”

My thanks go to Bob Spence for the many opportunities to make some great envisionment videos over the years. It seemed that the insights Bob had into the way we interact with machines, was well suited to video as way to show those ideas off and to communicate them to many other people.