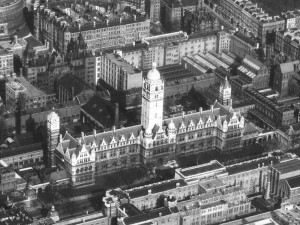 It interviewed all living past Rectors and the then current Rector Sir Richard Sykes. Since that time former Rector Lord Brian Flowers has died, so these interviews, in my view, have proved a worthwhile exercise. Also included were prominent members of the college community. We also interviewed an Alumni; Rogers Knight (6th December 1915 – 29th March 2015) who was a student of the City and Guilds College from 1934-1938. He also became heavily involved in student life and then years later with the Old Centralians Trust.

He tells us that, at the time he was a student, the whole student body was something like 1200. 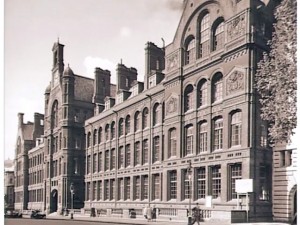 In the Royal School of Mines about 100 and the Royal College of Science and City and Guilds were about the same size at around 500 or so each. Rogers remembers the College Porter, dressed in his formal red morning coat, standing on the College steps every morning, greeting every student by name. I can’t see that happening any more! He says that, in his opinion, the buildings we had then, the Royal College of Science, the original City and Guild’s Building (above) and the Royal School of Mines were built with care and attention. He was interviewed by College Archivist Anne Barrett on 22 August 2006 in the College TV Studio

If you would like to see more of this type of Alumni video interview and can make suggestions as to who should take part, then please contact me via the LEAVE A REPLY box below. We would very much appreciate people like Rogers Knight who can tell us stories about Imperial College life in times past, especially those pre-war.

I was sad to hear that Rogers had died in March 2015 at the amazing age of 99! This interview is therefore even more important in recording the history of Imperial College from times past.