In 1981 the Centre for Robotics and Automation was formed by Professor Tom Husband and was located in the Department of Mechanical Engineering. 30 years ago, in 1984 we made a promotional video for the centre to showcase the activities and work being carried out. 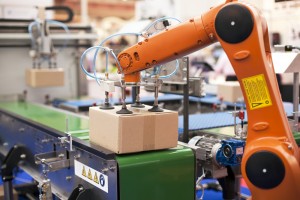 I can find little or nothing about the centre (or any photos) from college sources and assume it was closed some while after Tom Husband left Imperial College in 1990. Indeed, in Hannah Gay’s ‘History of Imperial College’ she comments that the move towards robotics didn’t work out as expected since the research attracted computer scientists rather than engineers. The only article I found on the centre is from an edition of the student newspaper Felix dated May 1985 (see pages 8&9). That centre is not to be confused with the current Centre for Robotic Surgery, which is something completely different.

The centre was located in the area of Mechanical Engineering that was on the corner that fronted onto both Exhibition Road and the entrance for cars (Imperial College Road). You can see people walking along the pavement and very close to the windows in the section that shows the Lansing robot working. The running of the robots was in fact a bit of a crowd-stopper at times, especially school kids on their way to and from the museums. It was one of the few showcases that Imperial ever had, maybe we need to bring one back again!