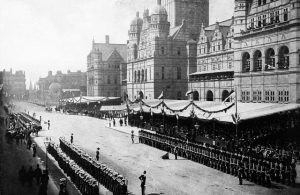 This is a quick and extra post to celebrate the 125 years of the Imperial Institute. There are many references within the blog to both the Imperial Institute and the Queen’s Tower, some of which I have linked here. However, today in 1893 is when Queen Victoria attended the official opening ceremony. These actual photos show the scene just prior to her arrival with all the flags and bunting displayed around the building’s entrance.

A special piece of music was written for the day by Sir Arthur Sullivan and was entitled Imperial March which is not to be confused with anything relating to Star Wars for which there is music of the same name. Below is a YouTube link to that piece of music, which was first performed 125 years ago this very day. In the photo over on the left you can see Queen Victoria. If you click the image you can see it full size. Look below the canopy and you will see her, still dressed all in black and sitting on a chair.

Of course, all that remains of the buildings is what we now call the Queen’s Tower. The bells of the now free-standing tower are still rung on special occasions. Even while the building was slowly going into disuse it was made famous in a brief sequence in an Ealing Comedy,  The Titfield Thunderbolt (1953), where a shot is clearly seen of the steps from the building’s main entrance. The building was not actually featured as the institute but rather as a ‘museum’.