In December 1981 former RAF pilot Sir Douglas Bader visited Imperial College Bookshop to promote and sign copies of his new autobiography. He took part in the Battle of Britain, was imprisoned at Colditz Castle and his life was chronicled in the film Reach for the Sky.  Surrounded by copies of his books, Lawerence Windley managed to get a few words with him.

Within a year of this video, in September 1982, he had died. 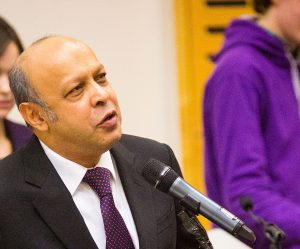 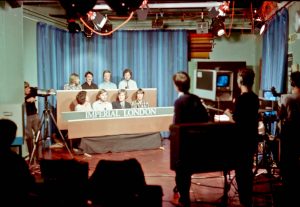 It’s pure coincidence that back in November I selected this particular video for the April blog. I guess it seems appropriate for today’s current pandemic situation and although being April 1st, sadly, it really is no joke.

Health and Welfare were items that featured on STOIC’s News programmes on a regular basis, starting way back in the early 1970’s in fact. In 1980 the college health centre in Princes Gardens had just been updated and improved. Mike Prosser went along to see the latest developments and to chat with Pat Kilshaw about the services and facilities available to students. We also get to see the sickbay with 5 beds. I also seem to recall that I actually shot this video for them.

This is a lovely record of what college facilities looked like 40 years ago.

John Passmore was the ICU President from 1980-81 and elected into that post in March 1980. The front page of Felix announced the election results on its front page of 14 March 1980. STOIC interviewed him in the TV Studio just after the new term had started. From the 8 October 1980, here he is talking to Graeme Shaw.

Not that long after the term had started he was in the news again. He was the victim of a ‘kidnapping’ rag stunt by City University. Once more STOIC was on the case and here’s their report from 13 November 1980, Mike Hackett was the location reporter.

In this blog we have the oldest interviews with an Imperial College Student Union President. Nick Brayshaw had just been elected into the post in March 1976 for the period 1976-1977. STOIC’s news programme was then called Lunch Break and was largely broadcast live from the college TV studio. These particular programmes were only recorded so that we could see what they looked like after the broadcasts. Luckily, for what ever reason, these interviews were copied onto the U-matic format and survive to this day.

Chatting to Nick Brayshaw later that week was Mike Williams. Mike was a former editor of the Imperial College student newspaper FELIX (1974-1975). He did many interviews for STOIC including another one also broadcast live, but this time over the ILEA cable network covering the whole of London. On that occasion in 1977 he interviewed the then film reviewer for the BBC Barry Norman.  I was in touch with him recently and he now resides in the USA and is working at the University of San Francisco. 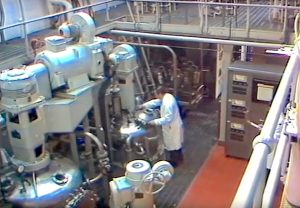 In 1982 the then Home Secretary announced that an independent inquiry under the chairmanship of Lord Hunt was to consider the broadcasting aspects of the possible expansion of cable television in the UK.

It was announced that they had managed to secure the help of Lord Hunt of Tanworth, Sir Maurice Hodgson and Professor James (Jim) Ring to conduct this inquiry. They had a lot to do in a short time, but they had already started work and a copy of the consultative document which they issued on 7 April 1982 had been placed in the Library of the House of Commons. Jim Ring was Professor of Infra-Red astronomy in the Department of Physics and appeared regularly on TV programmes such as the Sky at Night.

I knew Jim Ring well, and had previously recorded an archive interview with him in 1980. On the 21 October 1982 he came into the TV Studio to chat to STOIC’s Lawrence Windley about the committees work and their report.