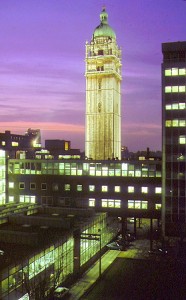 Back in 2010 I brought you the two videos that were made to coincide with the City and Guilds centenary in 1985, they were Studying for the Future and Discovering the Future. I had promised to bring you a third video made later in that year called Mastering the Future. Obviously, this video was intended to showcase and promote the idea of taking a masters degree at Imperial College.

Key figures from Industry were featured to give a sense of what was required from University students taking such masters degrees. One person appearing was Sir George Porter, later Lord Porter who was then President of the Royal Institution. Later he moved to Imperial College to continue his research work. By the time the video was made Eric Ash had become Rector, superseding Brian Flowers. One of the few recordings that we have of Professor Bruce Sayers, then head of computing and also dean of City and Guilds is part of this video. Once more there are some great views of ‘Imperial past’ featured such as: the original front entrance on Exhibition Road; Sports Centre and Gym; Libraries and the 1960’s Walkway with Bookshop.