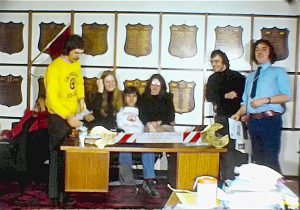 UPDATE: Once again, since this was posted, I have had feedback & info from Paul Jowitt and Graham Hanson. Paul starts with references to Cathy Morley (Gee) and also adds some names he can remember:-

And this from Graham Hanson:-

Graham Hanson was CGCU Hon Sec in 72/73 and can be seen at the start of the video in the bright yellow IC top.